BACK OF THE NET

What with the current general feelings of disdain towards EA after putting Visceral Games’ Star Wars project out to pasture (a story that Jason Schreier has nicely summarised over at Kotaku), here’s some contrasting praise for the publisher:

with The Journey: Hunter Returns, Electronic Arts have succeeded again this year in creating a genuinely enjoyable single player experience that runs parallel to the Ultimate team and Pro-Clubs game modes most fans purchase annually for. Here are some notes about the game.

Hunter after his move to the MLS early in the game. The best feature of all has been retained: The ability to pause the cut-scenes and watch the character’s clothes continue to move.

Starting in Brazil, the story has you slide tackling children in the opening cinematic, and it’s awesome. The opening cinematic, that is, showcasing the multitude of actors and real players involved in the project. Not nipping a child’s career in the bud. Is that what you were thinking? Shame on you. Red card.

This year’s journey mode amalgamates the progress and choices you made in last year’s instalment and continues the football-centric melodrama but with even more agency over Alex Hunter, continuing an almost Telltale-esque illusion of depth and branching narrative. Not only do you have ranging dialogue options that will alter your perception amongst fans and management, but you now have additional nuances such as the ability to fully personalise Hunter’s style both on and off the pitch. The improvement in graphical fidelity bolsters this variety, and it made my obvious immediate decision to apply an octopus tattoo a joy.

Whilst these are ultimately superfluous decisions in the game, they allowed me to personalise and align with the character when banging them in from the half way line. To be fair though, to contrast this point, I did act like an absolute wanker for the first half of the game in order to unlock the fiery, cheetah style haircut. Was it worth it? Absolutely.

Here’s a low res image of Griezmann congratulating me at Athletico, since that’s the European club I chose to return to after conquering the MLS. To be honest Antoine, you were less of a help than a hindrance: Poor placement in the box mate, you should have been on the end of a LOT more crosses. This was a long caption.

In terms of the gameplay, it’s football. As with the previous game, development of skills both in the statistics of the player and your actual skill level mutually assure improvement, and this is matched by the dynamic difficulty feature attuning itself to your play. Starting off at Semi-pro, I ended up being WORLD CLASS (world class difficulty, unfortunately I don’t think I’m quite world class yet). This is genuinely rewarding, and it inspired me to take my newfound ability into the other modes. You are also coerced into FUT with nice starter player packs and Hunter/Williams themselves as players, which is nice.

The gameplay is also furthered by more variety and flair to break up the monotony of traditional pro-clubs or standard style play: new, creative training challenges, the introduction of different mechanics as you progress (i.e the partner situation), and even the option to play as 6’4 Williams or Hunter’s estranged American prodigy sister.

Dependant on your success across the board, you will finish each chapter to a differing degree of completion. It may not make a difference in the long run, but It keeps the game fresh, even though it’s football at the end of the day. 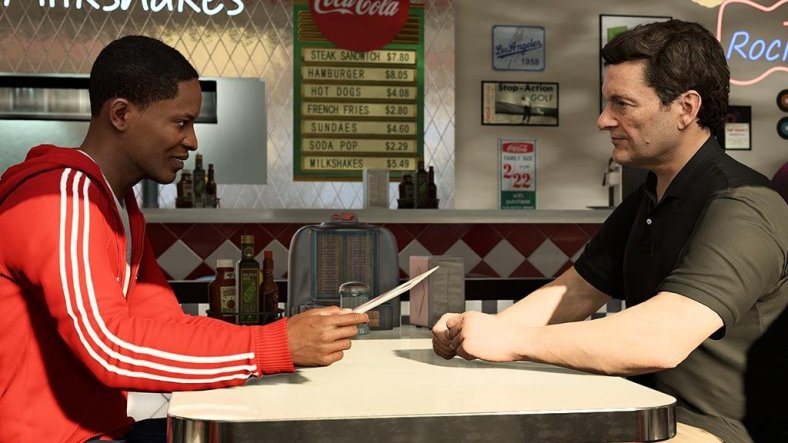 Here’s Alex with his Dad in their favourite Diner. They definitely aren’t here on a daily basis because EA want to reuse the asset. The hot dogs are just absolutely phenomenal. Plus, by using mustard and ketchup bottles, Alex can learn about the red and yellow cards in a tactical discussion across lunch.

One thing I will say is that the meaningful scenes and story overall seemed to peter off towards the end of the experience. In order to illustrate this point, I’m also going to make this sentence (and subsequent paragraph) peter off so tha-

It’s clear that the lack of any mention of the champions league or world cup mean good things for Alex in the future, and I have no complaints about that at all. EA are in a position now where if they omitted The Journey from FIFA 19, it would would be noticeable.

Great single player experience from a company that are seemingly lacking confidence in single player experiences. It’s telling that The Journey: Hunter Returns is an optional addition to a largely multiplayer, annual title. Perhaps this is what we can expect (and are already seeing with Battlefront 2) from future Star Wars endeavours.